If you’ve come over from the remarkable Carrie Elks, welcome. This week’s challenge comes from the wonderful Susan Scott Shelley – Guess Who’s Coming to Dinner? Given the choice of any authors in the world (living or deceased), who would you want as a guest?

William Goldman. Of course he wrote “The Princess Bride” and so many other screenplays, but he also authored, among other books, “Adventures in the Screen Trade”. What an awesome treatise on writing. And how Hollywood works. He taught me the difference between reality and believability (A Bridge Too Far). Because life is sometimes harder to believe than fiction. From him I learned your hero cannot fail or you lose your audience. (The Great Waldo Pepper). He took his share of criticism (He was panned by critics for a little film called “Butch Cassidy and the Sundance Kid”) and he claims no one knows anything about what will be successful. But he clearly had fun.

There are many authors I would love to talk to one-on-one. Of course, Nora. And Stephen King. And Kristan Higgins. And too many others to name. Someday I would hope a reader would name me as a chosen dinner companion. It would mean I inspired them and that would be awesome! Let’s hop over and see who the incredible Susan Scott Shelley would like to invite for dinner. 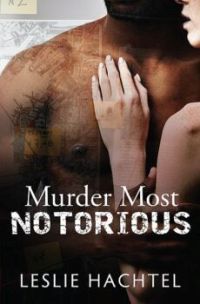 Leslie Hachtel is giving away autographed copies of MURDER MOST NOTORIOUS to 4 winners and a $20.00 Amazon gift card to a fifth winner.